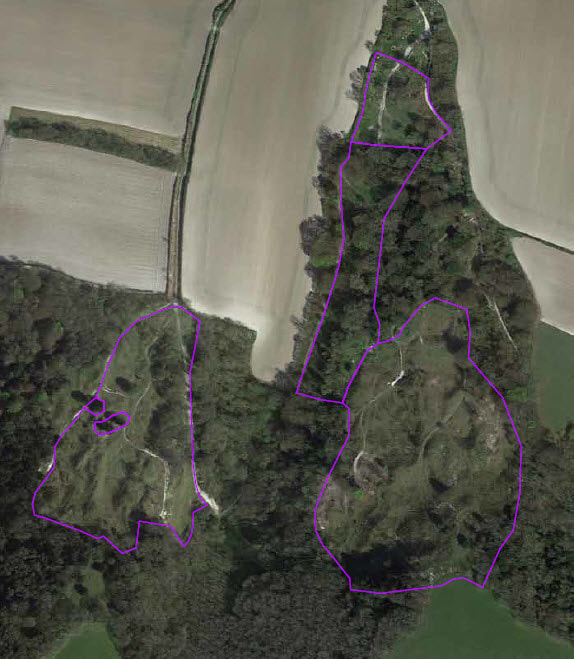 Heyshott Escarpment NGR SU899169
An old chalk working, last used in the 1930s, which is a significant area of open grassland within the generally wooded north-facing scarp slope of the South Downs. Woodland cover has increased generally since the cessation of working. This is noticeable even in comparison with the 1970s. Over the past 10 years
there has been considerable clearance of trees and scrub made within the remaining more open areas and these are now grazed by cattle at different times of the year. The regeneration of scrub is a constant issue, tackled by both volunteers and contractors for the Trust.

A steep climb to the top via the public footpath, rewarded with fantastic views northward over the West Sussex Rother Valley, as well as an appreciation of how hard life must have been for the quarry workers without dynamite, mechanised diggers and using ponies, donkeys or wheelbarrows only.

The site divides into four main areas, with an additional central one dedicated to the needs of the local shoot. These areas under MDT management are the western spur, the eastern spur, the coomb running under the eastern spur and the old woodland, typified by Ash Fraxinus excelsior, Whitebeam Sorbus species, Beech Fagus sylvatica and Yew Taxus baccata. The Whitebeam is often colonised by Mistletoe Viscum album. Within the woodland old logs (especially damp ones) host a number of mosses and liverworts, including Palmate Germanderwort Riccia palmata.

The grassland of both spurs is a high quality calcareous one, with plants such as Horseshoe Vetch Hippocrepis comosa, Devil’s-bit Scabious Succisa pratensis, Small Scabious Scabiosa columbaria, Round-headed Rampion Phyteuma orbiculare and Cowslip Primula veris. Whilst Dogwood Cornus sanguinea is often a major invader of the grassland and one which we are keen to restrain, there are other typical chalk grassland scrub species, such as Wild Privett Lingustrum vulgare, Wayfaring Tree Viburnum lanata and Buckthorn Rhamnus cathartica. Patches of scrub are very much a part of chalk grassland; our problem is encouraging the species we want and discouraging the others, whilst keeping the prime raison d’être of the open chalk grassland.

Owing to its largely north-facing aspect the site has long been known, indeed it is part of its SSSI citation, for the collection of usually more northerly mosses and liverworts. These include Rose Moss Rhodobryum roseum, growing nearby the bridleway on the western spur and the liverwort Jungermaniana atrovirens on the eastern Spur. Many of these species like the rather more humid environment provided by the shelter of the scrub element, but too much scrub removes the light, killing them.

Another species found here and which requires a more humid environment around scrub patches is the Duke of Burgundy Butterfly Hamearis lucina. Until the end of July the caterpillars feed on the leaves of Cowslip growing in the turf before pupating in the mosses. If the Cowslip leaves die back before the caterpillar has fully fed this is a problem. Cowslip plants growing in slightly shaded situations grow for a longer period than plants growing in full sun; the butterfly is, therefore, quite strongly associated with north-facing slopes in southern Britain.

A small range of birds is closely associated with a matrix of small scrub patches and areas of open grassland. For some years we have been aware that the Tree Pipit Anthus trivialis, a greatly declining species, has bred on both the Escarpment and the Down. As we already need small patches of scrub, managed on a rotation, the requirements for this species match with those of other significant species found here and we hope to have breeding Tree Pipits for the foreseeable future.