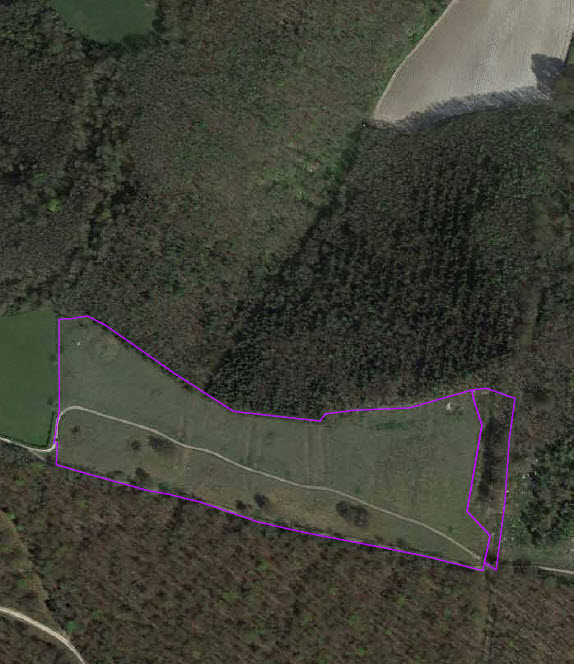 Our third ‘downs-top’ Reserve and the most easterly. Access is along the South Downs Way from the Cocking Hill Car Park or, for the fit, a brisk uphill walk on the Bridleway from Heyshott, known locally as ‘Chalky’. There are fine, if intermittent, views into the Rother Valley far below.

Leased from the Cowdray Estate, Heyshott Down has two great archaeological features: a set of Bronze Age and Iron Age barrows and the enigmatic ‘cross dykes’ which run north to south across the Reserve. The function of these is completely unknown, although theories abound; why should anyone want to excavate great ditches across the summit of the Down - but not make these go anywhere?  Click the button below to learn more about Heyshott Down's barrows and cross dykes.
Barrows and cross dykes
Ecologically the Reserve divides into three sections. Most easily recognised is the land to the south of the current track of the South Downs Way. This had been abandoned to the woodland further south before the MDT took over the lease. Sterling work in the 1990s re-located most of the woodland back to the other side of the track. Additional trees were removed, along with the fence-line, and cattle grids added across the South Downs Way in 2012. A particular land-mark is the large Beech toward the eastern end, blown over in the 1987 storm and which has subsequently layered, sending up new trunks from the prostrate trunk. The grassland here is well on the way to being restored as a high quality chalk sward, although at the eastern end an increasing depth of clay is indicated by stands of Bracken.

The second area lies on your left as you enter the Reserve from the eastern end. The barrows are all in this area and several cross-dykes cut across it. It extends to about half-way along the western end of the South Downs Way, at one of the cross-dykes.

This is high-quality, long established, chalk grassland and is scheduled as a Site of Special Scientific Interest on this basis. Frequent chalk-grassland plants include Small Scabious (Scabiosa columbaria), Horse-shoe Vetch (Hippocrepis comosa) and Wild Carrot (Daucus carota). There is a very wide range of insects present, including both Dingy (Erynnis tages) and Grizzled (Pyrgus malvae) Skipper Butterflies. The Bombylid fly (Villa cingulate), thought to be a predator of Lepidoptera caterpillars, was first recorded in West Sussex here on an insect survey during 2016.

The third area runs from the half-way point to the final cross-dyke system - which is also the boundary between Heyshott and Graffham Parishes, marked by a line of old Beech Trees. This area supported a crop of * spruce, planted directly over chalk grassland in the 1950s***. With great credit to the Cowdray Estate this area was harvested, but not re-planted, being made over to the Murray Downland Trust lease. Although initially densely covered by Hemp Agrimony (Eupatorium cannabinum), a typical response to chalk ground which has been under tree cover, repeated cutting and removing brought this plant to more manageable proportions and a varied chalk grassland flora has established on most of the area.

The central part of this was marked as being Gorse in the 1918 Ordnance Survey map, a response to the increased depth of clay-cap. Gorse is now re-establishing here and a programme of rotational management is being implemented with a view to providing nesting habitat for birds such Linnet (Linaria cannabina), which are associated with a matrix of scrub and open grassland. The spiky clumps of Tufted Hair Grass (Deschampsia cespitosa) are also frequent here, indicating the rather damper ground of the clay cap.

Click on the buttons below to view the Heyshott Down SSSI citation and map respectively.
SSSI Citation
SSSI  Map