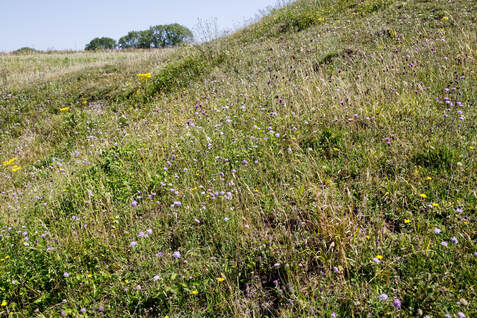 ​
​The Murray Downland Trust Reserve at the Devil’s Jumps on the South Downs Way above Treyford is a popular stopping point for walkers. Most of these make straight to the top of the nearest barrow, have a quick look around and go back to the SDW. Few notice the rich floral tapestry of the sides of the barrow where the ancient builders piled up chalk from under the clay which caps the Downs in many places. In July and August a major part of this floral display is provided by Small Scabious, with its lilac pompom flowers. 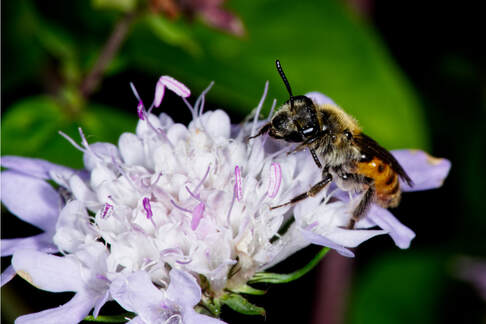 ​Still fewer will see the small Andrena mining bee working the flowers and the pink pollen loads gathering on her legs as she does so. I have known this bee, Andrena marginata, in the Harting Downs area since the 1970s and the Devil’s Jumps is now a major location for it. Not only does it have its essential food source, Small Scabious, in plenty, but also a suitable place to nest. The management to reduce the scrub which wants to take over the grassland and heath - yes there are heathers, two sorts, growing here - provides small patches of warm bare earth where the mining bee makes its nest burrow. 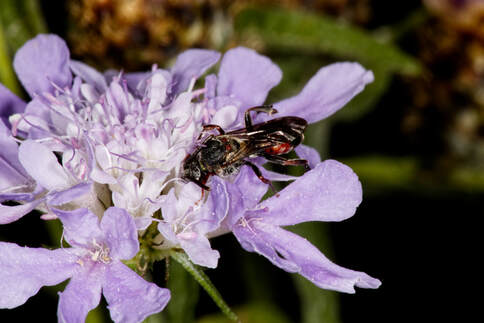 ​Ever since I have known that Andrena marginata is present I have looked for an even scarcer bee. This one, Nomada argentata, is a cuckoo bee which lays its eggs in the completed nest cells of the Andrena. This August, 40 plus years on, I finally found it, on Small Scabious at Devil’s Jumps. In Sussex it has only ever been found on the Downs immediately to the east of Brighton, the last time in 1977! 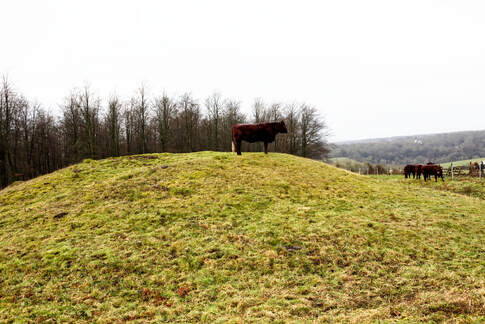 ​Given its very close association with Andrena marginata and the long-standing presence of this bee, Nomada argentata is likely to have been here all along. The Devil’s Jumps Reserve is too small to have supported a population all on its own; credit here should also go to the National Trust at Harting Down (and who also graze the Devil’s Jumps for the MDT) and also the adjacent farmer with his herd of Sussex Cattle on the escarpment. Because of the suitable grazing Small Scabious is well distributed over the area, providing good quality habitat for the two associated bees.